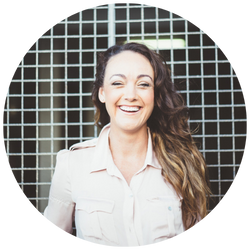 The relationship that forms between an interior designer and client is built on trust. Without that, the magic never happens. When a client trusts in the process, they relax and enjoy the creativity that expands their understanding of how their home can support them to live an expanded life. I feel privileged to lead home owners through this journey that gives so much to me as an interior designer.

If you ask any other interior designer, I’d say they’d agree with me that the day-to-day can be quite a rollercoaster depending on where you’re up to in a project, depending on what’s happening with the client, with a supplier, a tradesperson or what’s happening on site. And so the highs can be quite high and the lows can be really devastating. When you’re in the midst of a low you can take a big knock to your confidence as an interior designer. I’m sure that most other interior designers feel this way. As an interior designer, I put so much of myself into each and every single project that I work on, that when things go wrong, which they do, it’s a really difficult situation to find myself in.

And there’s really nothing better than that. And then, the other high will be… for anyone who has renovated before this is going to sound crazy but I personally love being onsite during a renovation. That’s got to be one of the most stressful and yet most exciting components of any project. I’m not sure if I’m a little bit bonkers when I say that, but that’s always been one of the things that I really love about being an interior designer. And I loved it even before I trained as an interior designer. When I was renovating homes for myself, way back when, that was always the most exciting thing being onsite, working with the trades, working through problems, coming up with solutions that both tick the box for me in terms of the aesthetic of the design itself, but also working with the trades in terms of making sure that everything would actually work properly. Seriously, one of the best feelings.

So the highs you feel like you’re soaring and the lows can be devastatingly low. This can be an extremely stressful profession, but it is honestly one of the most rewarding things that I’ve ever undertaken in my life. To successfully walk through a project with a client from the start to the finish and be there with them the entire way as their cheerleader, as their advocate, as the person that’s removing the stress of actually going through a renovation. That’s rewarding. The most rewarding part about being an interior designer though, is after you leave the project. After the family has settled back into their own normality, they’re back into their own routines, they’re back into their own space. And they get to enjoy their home!

It’s almost like they’ve been holding their breath for this entire process and finally, they can let that go. Finally, they can breathe out. And then they see the wonderfully supportive environment that has been created for them, by me and by the team of professionals that I work with. When you check back in with a client after three, four months and see how relaxed they are, to see how much enjoyment they get out of being within those spaces that I’ve been able to create for them, it’s one of the best feelings. To see the difference to the lives of those that live in that home, I really do think that is probably why I persevere being an interior designer.