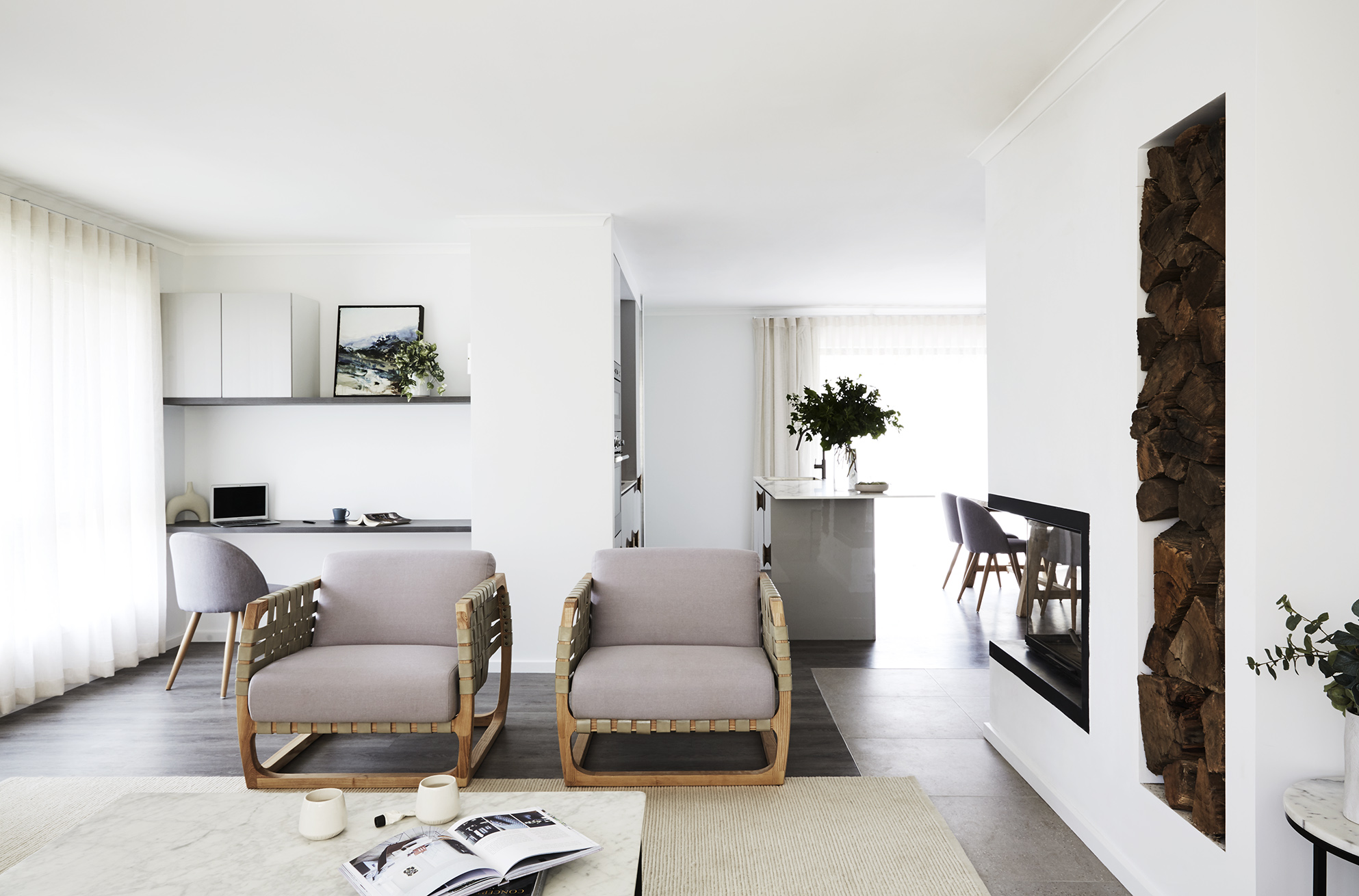 Renovating the Baron Cottage was challenging and required meticulous space planning to create a modern family home. When homeowners are willing to trust the design process, magic like the Baron Cottage can happen.

When I first visited the Baron Cottage I had a deep understanding that this was a property that possessed a warm personality, an unassuming character that had stood in observation for generations, where good memories had been made within its walls. Walking into the Baron Cottage felt like I was getting a really big bear hug from Pop as a kid. The bear hug was just being hidden underneath some fairly hideous design choices.

Before Baron Cottage was the Baron Cottage it was a rental property and whilst the years hadn’t been exactly unkind they hadn’t been exactly kind either. It was a mish-mash of flooring, the kitchen design was suited to a different era and an old disused chimney was taking up valuable floor space. The bathrooms were pokey and the laundry was horrifically oversized. All-in-all nothing that a great renovation couldn’t fix!

The owners would be completing the majority of the exterior renovations themselves installing a large rear deck, front courtyard, large expanses of fencing and lawn to wrap around the house, a firepit and orchard so working collaboratively to ensure the interior and exterior connected and transitioned seamlessly was critical for a successful renovation.

Can I just say from the outset that the owners of the Baron Cottage were a dream team. They were extremely open to the design process, they were willing to say no if they didn’t like something and they trusted me even when they couldn’t quite understand the end result. Plus, they wanted the home to retain it’s large gardens rather than expand the house unnecessarily and this was music to my soul.

When the plans were presented and we worked through each space, there was serious excitement, however, they were both a little skeptical that everything would actually fit like it was drawn on paper. Rather than try to convince them on paper, I set about with masking tape laying out the new floor plan. They could see where new walls would be, where the new windows would sit, where the kitchen would be in relation to the butlers pantry and the laundry, how big the dining area would be, where that epic fireplace would end. Eventually, they could walk around the new space in scale and that’s when they got really excited. I have to admit it was a little tricky because some walls were in the way, but we got there in the end! 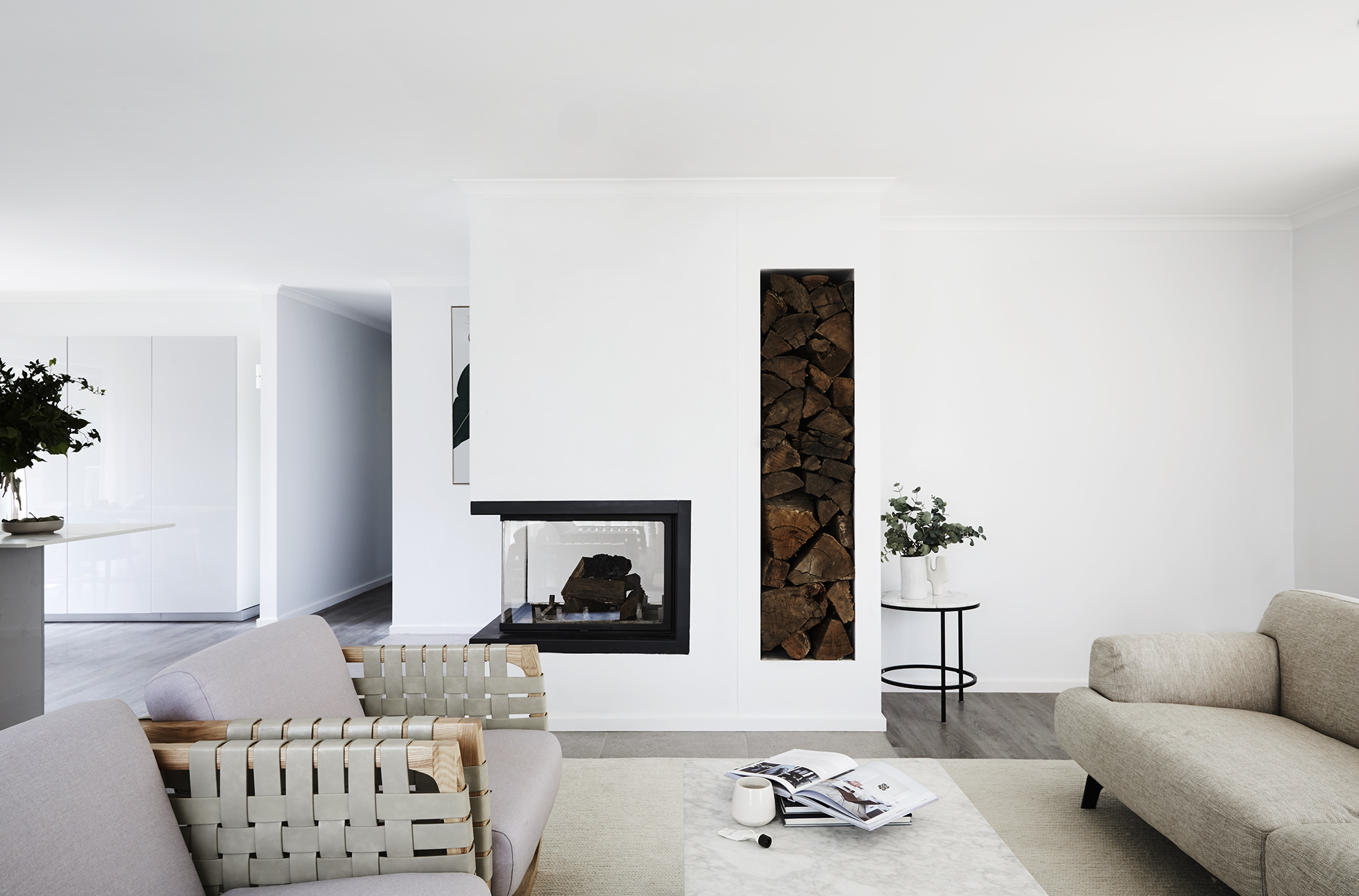 I think homeowners are unbelievably brave to commit to completely tearing their home apart so they can rebuild it to suit how they want to live. Let’s face it, once you start that process there’s no going back. A renovation is not cheap and living onsite is stressful.

I think homeowners are unbelievably brave to commit to completely tearing their home apart so they can rebuild it to suit how they want to live. Let’s face it, once you start that process there’s no going back. A renovation is not cheap and living onsite is stressful.

At presentation, everything single detail is considered and laid out to the homeowners for their approval including the plans, finishes and fixtures, equipment, window treatments, furniture and soft furnishings, labour and materials. When I say everything, I literally mean everything that is within the scope of work. It’s a big job but by the end of presentation the homeowners have a complete design with a renovation budget and an estimated timeline. There’s a number of reasons why I work in this way, but one of the advantages is that by the end of presentation the homeowner has finalised their decision making process and we can move onto the actual build itself. Last minute decision making isn’t required because it’s all done before we start demolition so at least that is one stress removed from the process!

Although the volume of the Baron Cottage remained the same, the internal configurations changed dramatically to accommodate modern family life and the rear elevation was streamlined to create a pleasing exterior. Let’s take a look at the kitchen and bathroom and what we did in those areas.

kitchen before and after 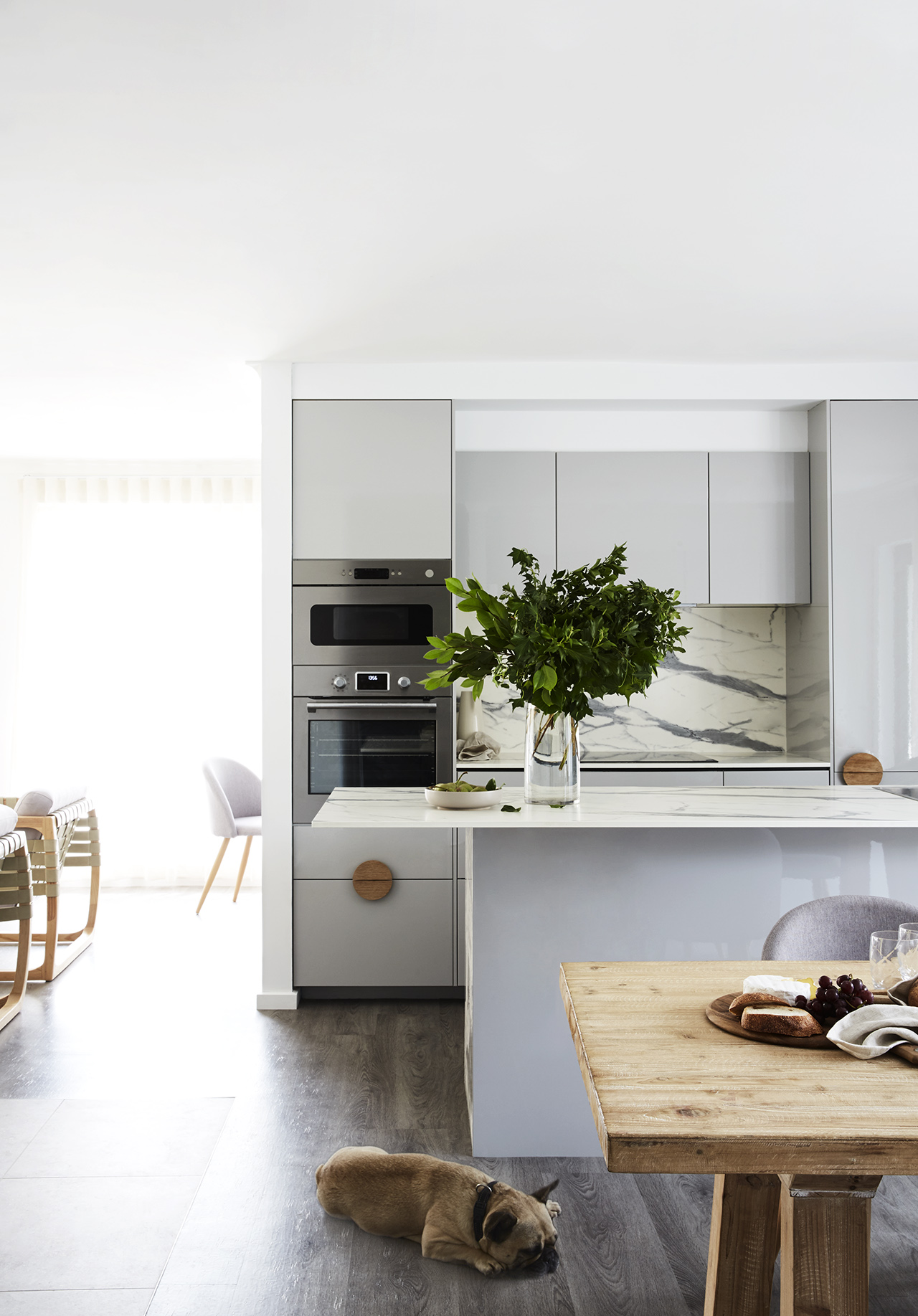 The kitchen was fairly typical of this era of building. Although it was an OK size and relatively functional, it was stuck in the corner, cut off from the living areas and completely uninspiring. Space planning was intense with the purpose to create connections between the kitchen, living and dining areas. Spinning the kitchen orientation 90° gave us that opportunity to connect with the other key areas in the home both visually and physically creating a central hub for the home. Positioning of the kitchen also allowed opportunities for a butlers pantry and laundry to sit neatly behind the kitchen that also created the perfect opportunity for a study nook facing into the living room. 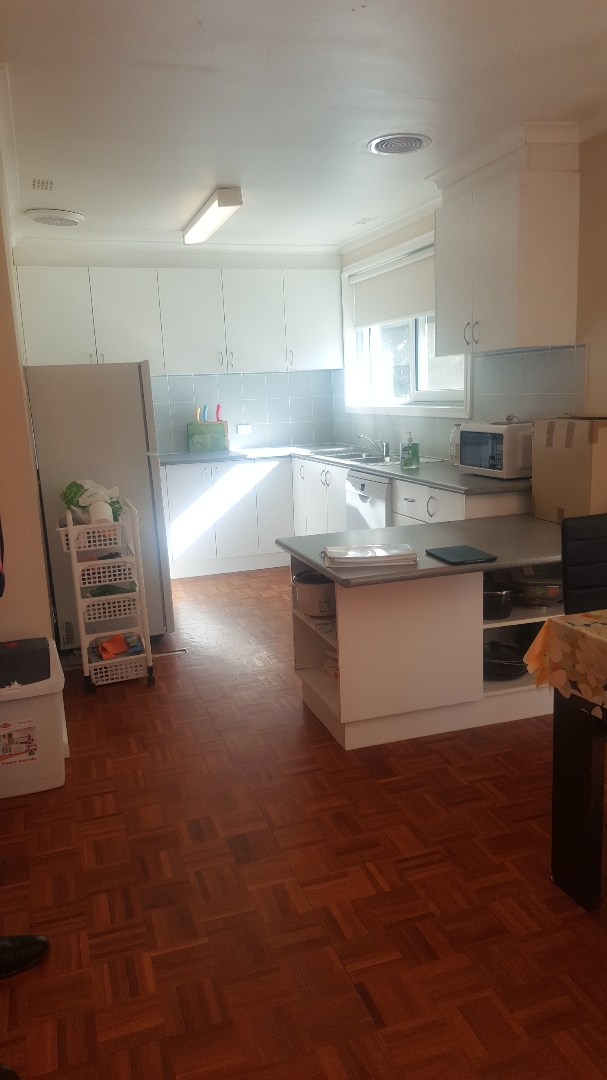 The kitchen was previously tucked into a corner and was closed off from the rest of the home and at best could have two people in it at any one time. An uninspired space, it lacked character and felt somewhat unloved. Rotating the kitchen and facing it into the home brings conversation and connection to a previously stagnant space. 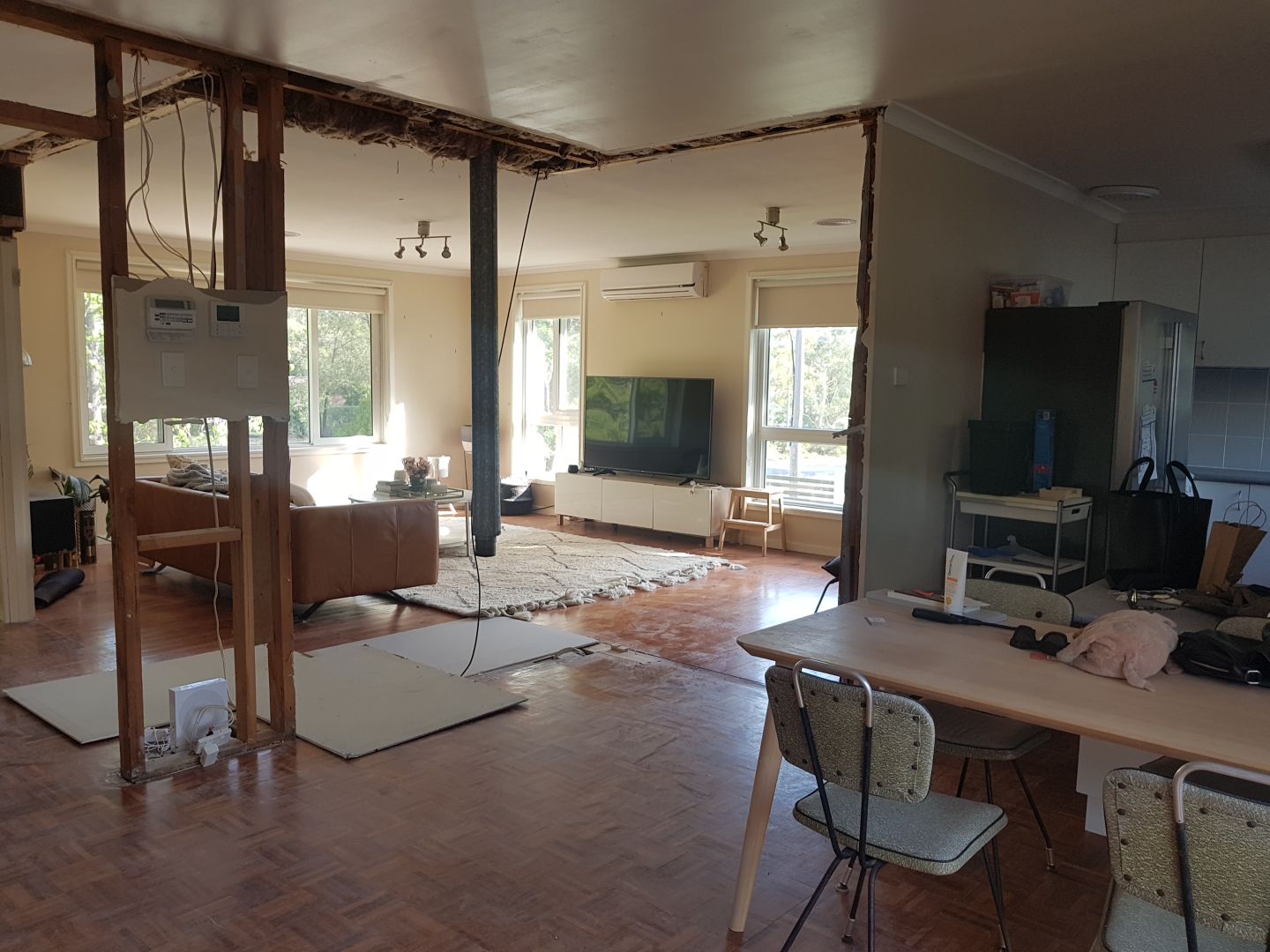 The old chimney and internal walls being removed between the kitchen and dining areas allows light to flood the entire space and creates space within the existing footprint. The new study nook will be tucked away behind where the fridge is currently sitting and the entire living room is reorientated to create connection with the rest of the home. 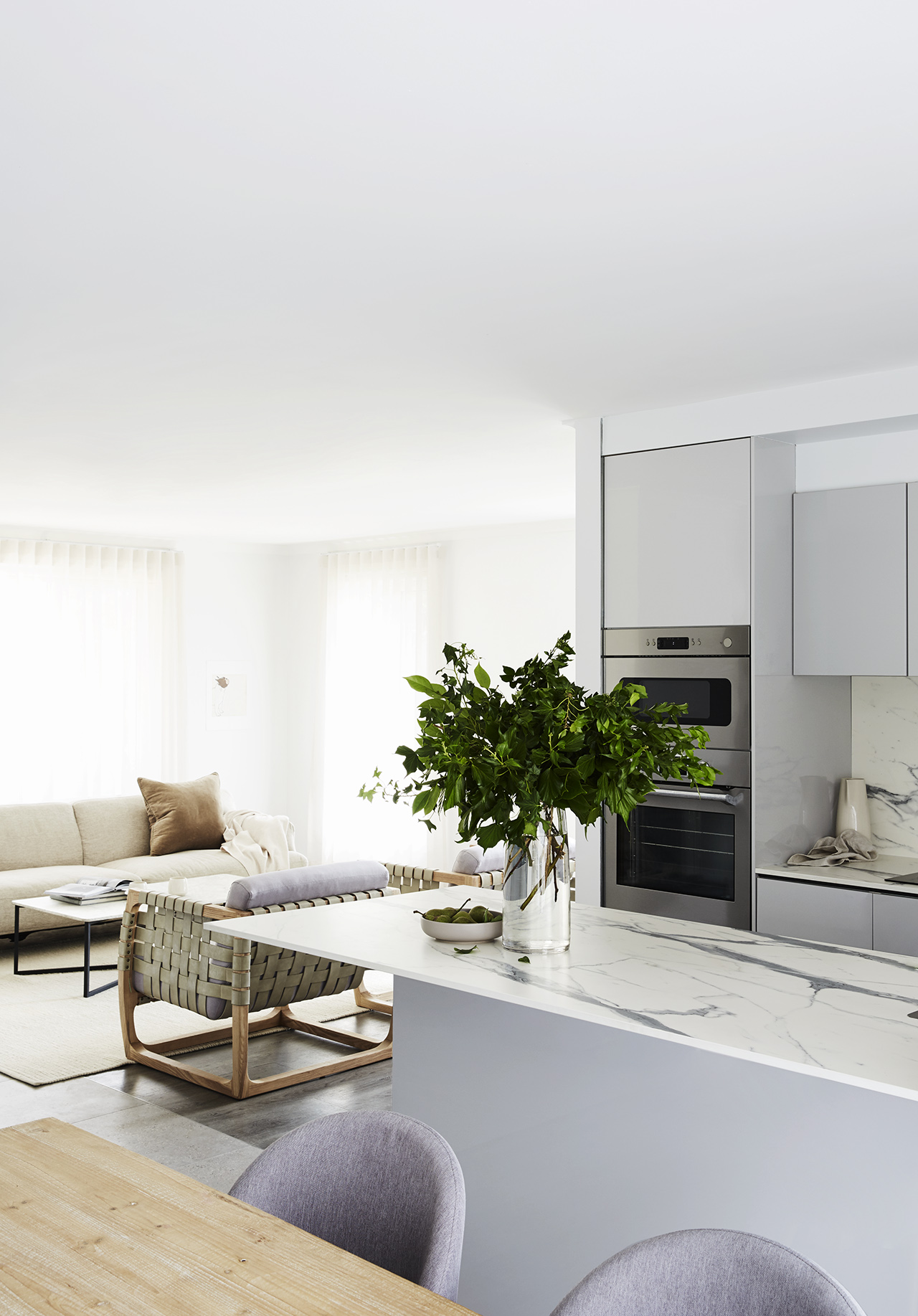 The kitchen is now the hub of the home with connection to the dining, living and outdoor areas. 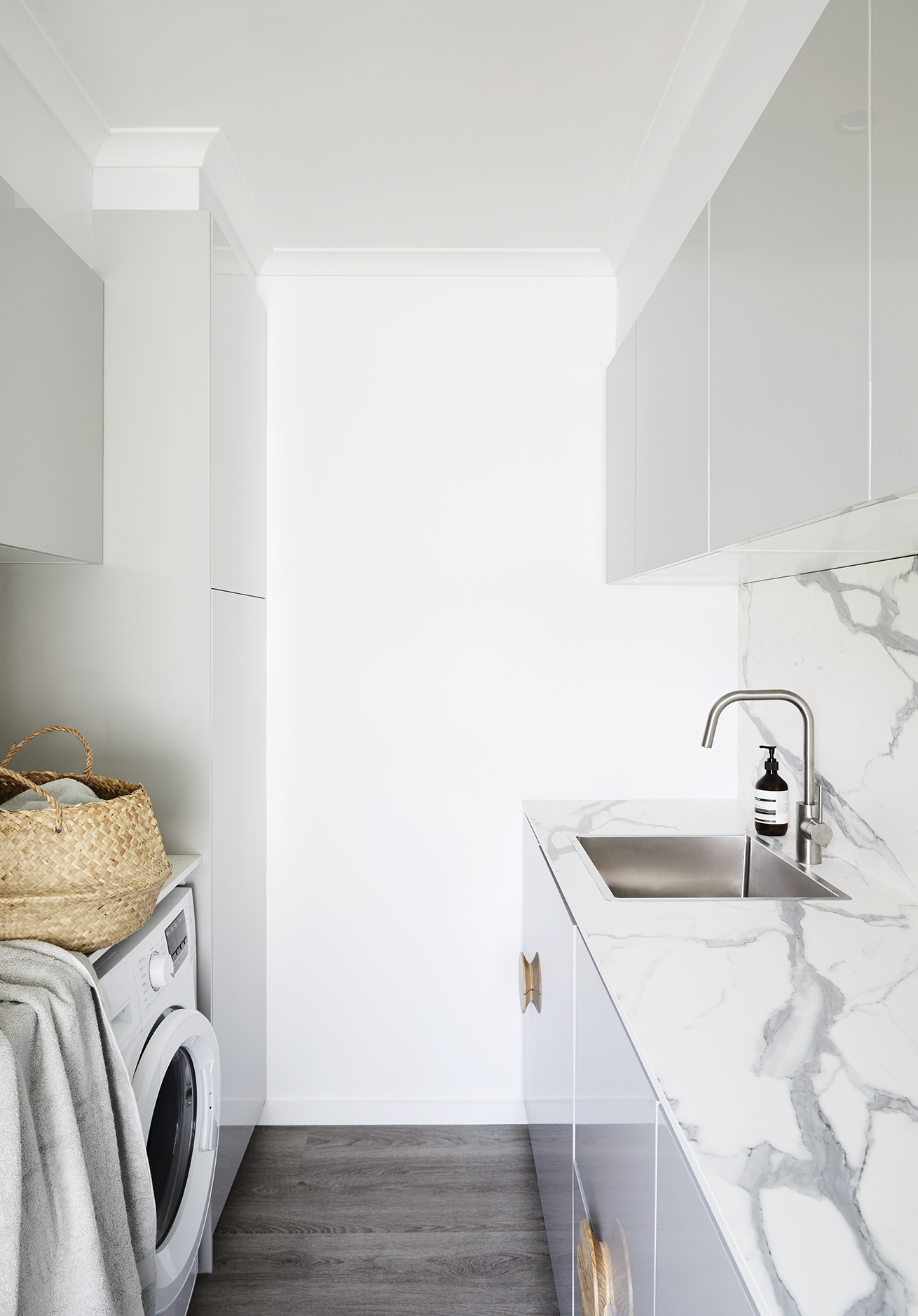 The butlers pantry and laundry are tucked in behind the kitchen providing loads of storage and functionality to a busy family home.

bathrooms before and after

Like the kitchen, the bathroom was fairly typical of this era of building. It was pokey and this was the one room that was really showing its age. We had a structural wall that we were working with and a hot water system to contend with, walls to remove to open up to the old laundry and windows that needed changing out. It was extremely important to create a generous sized family bathroom and luckily with the laundry being relocated that space could be taken back to expand the bathroom and ensuite areas that then allowed for a walk-through robe in the master. 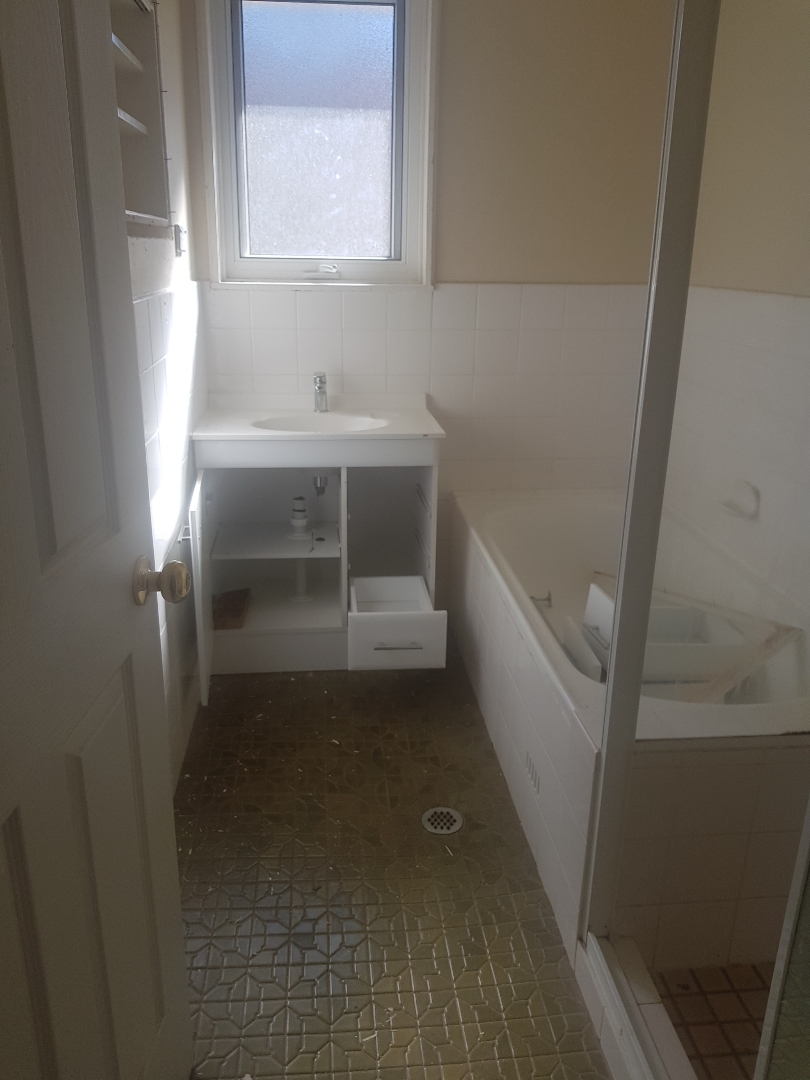 The old bathroom was tiny and less than ideal for a four bedroom family home. It’s getting ready to be demolished and will form part of the new master ensuite and walk-in-robe.

The old main bathroom is gone and the wall has been opened up to make way for the new master ensuite and walk-in-robe. 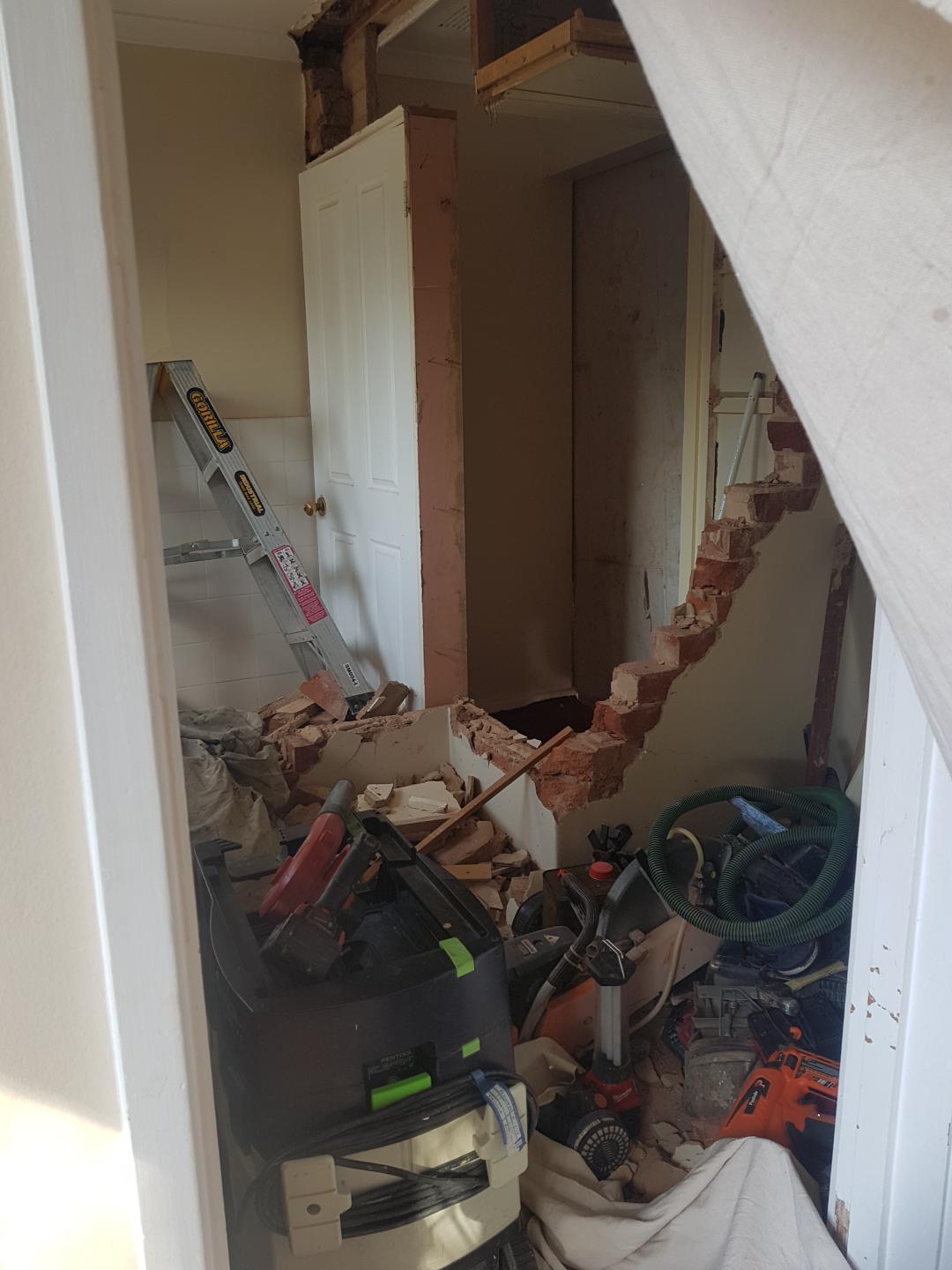 Opening up the walls between the old laundry, WC, hall and linen closet to create the new bathroom. The hot water tank was relocated to maximise the space for the new main bathroom. 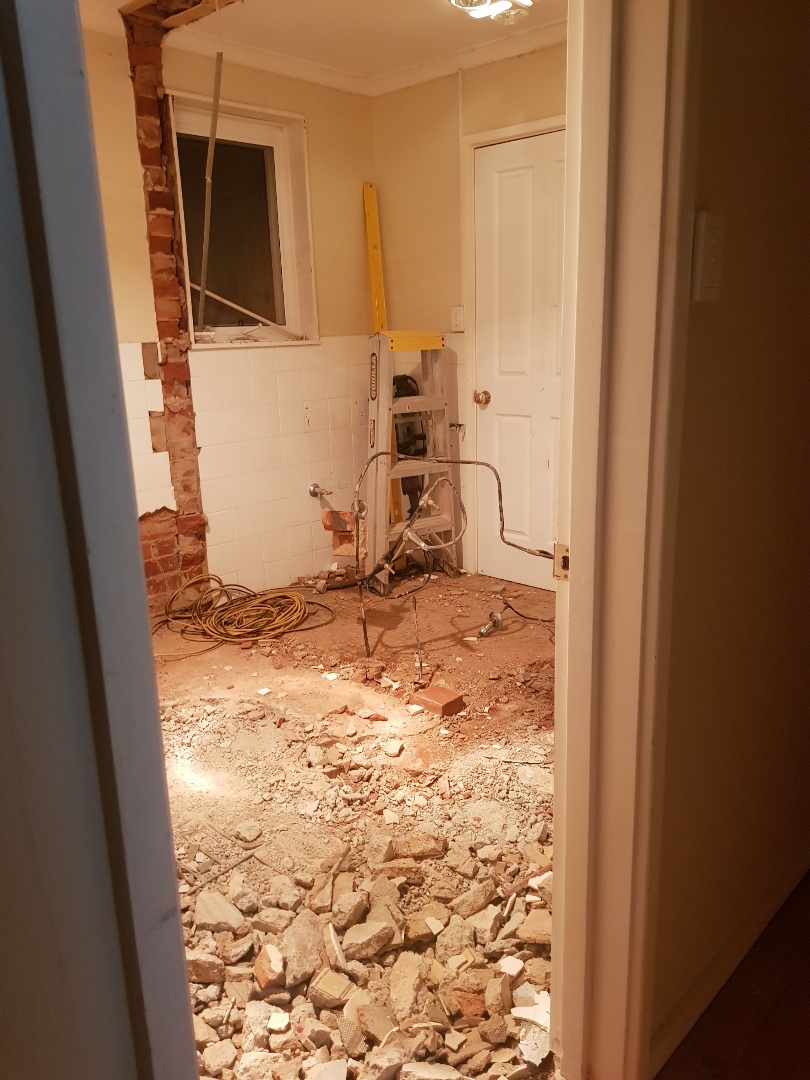 The space for the new master ensuite and walk-in-robe is opened up and reveals itself. 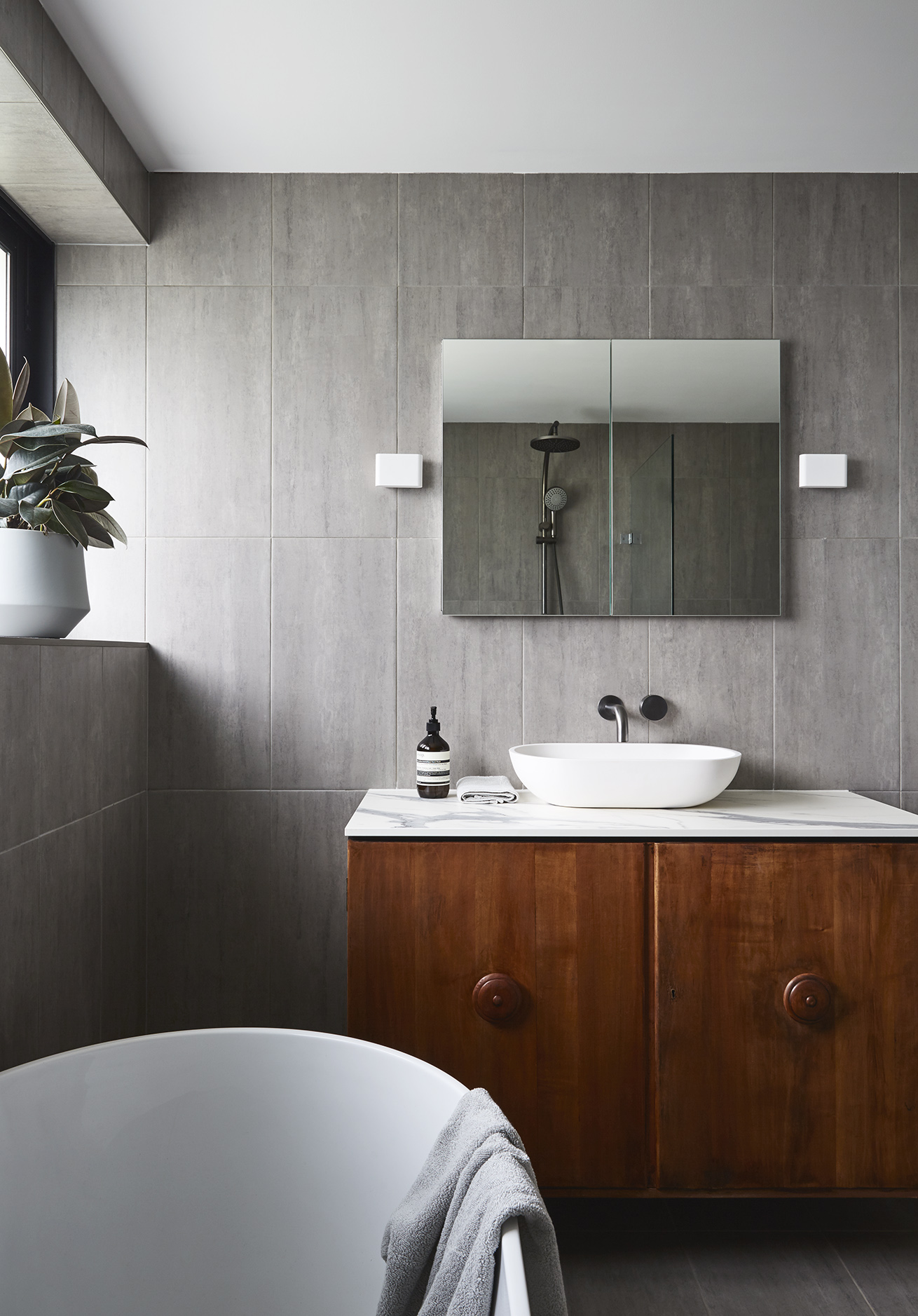 The new family bathroom with its gorgeous free-standing bath and vintage repurposed vanity is of generous proportion, beautifully functional and the new window floods the room with natural light. 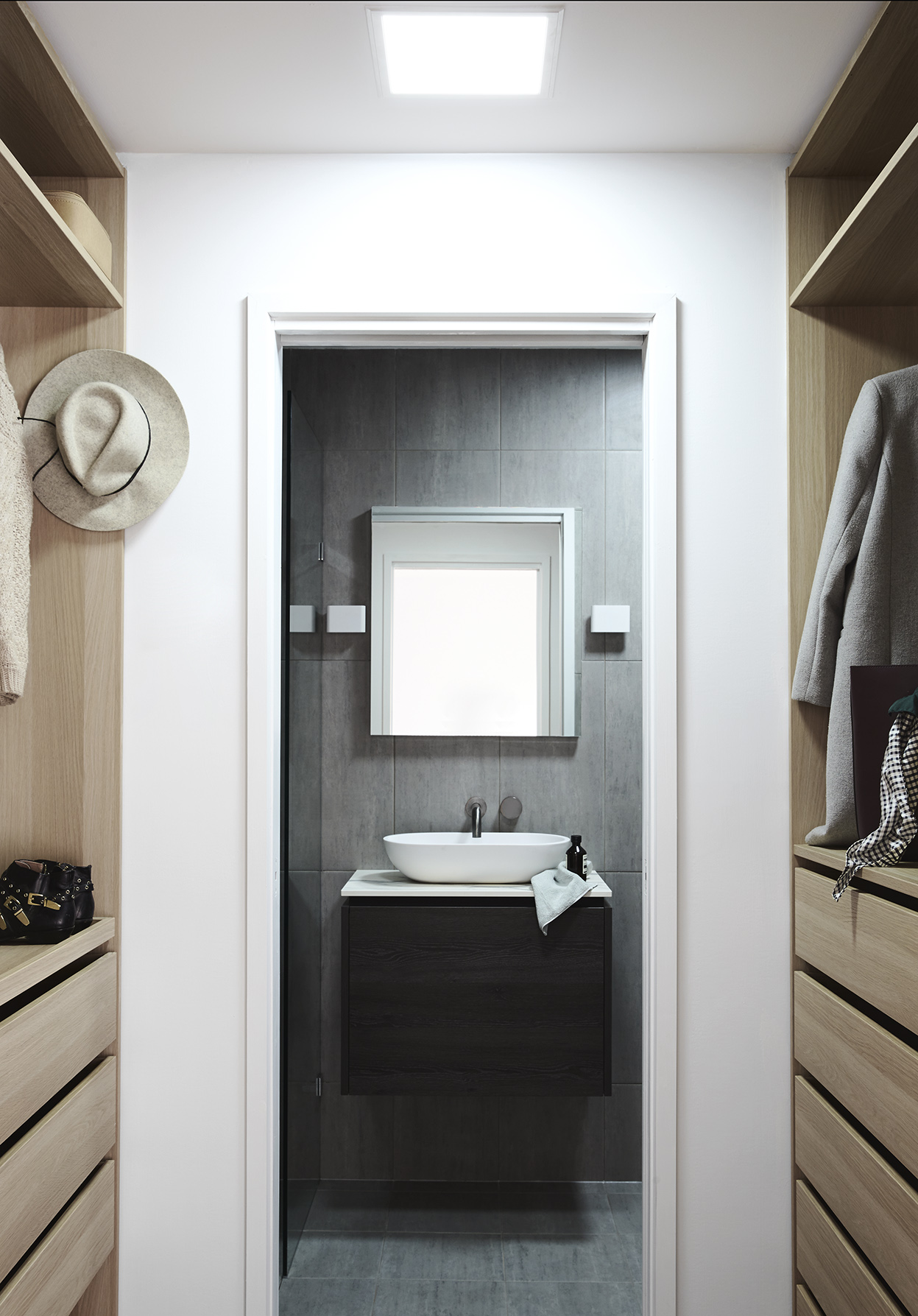 The new master ensuite and walk-in-robe takes the place where the old main bathroom and ensuite were previously positioned. A light well floods the walk-in-robe with natural light.

living room before and after

Whilst a fireplace was always on the wishlist a three-sided fireplace just upped the wow factor in this space. When you work within the existing footprint of a home quite often this is when creativity and problem solving skills really shine. Looking at the Baron Cottage it became clear in the space planning stage that the very edge of the living area sat roughly in the centre of the home and this is when the idea for the three-sided fireplace came to life. From its position, it becomes a focal point and can be enjoyed from pretty much any vantage point in the kitchen, dining and living areas. Plus, because it is centrally located it has the ability to warm pretty much the entire home, an ideal solution for those chilly Canberra winters. 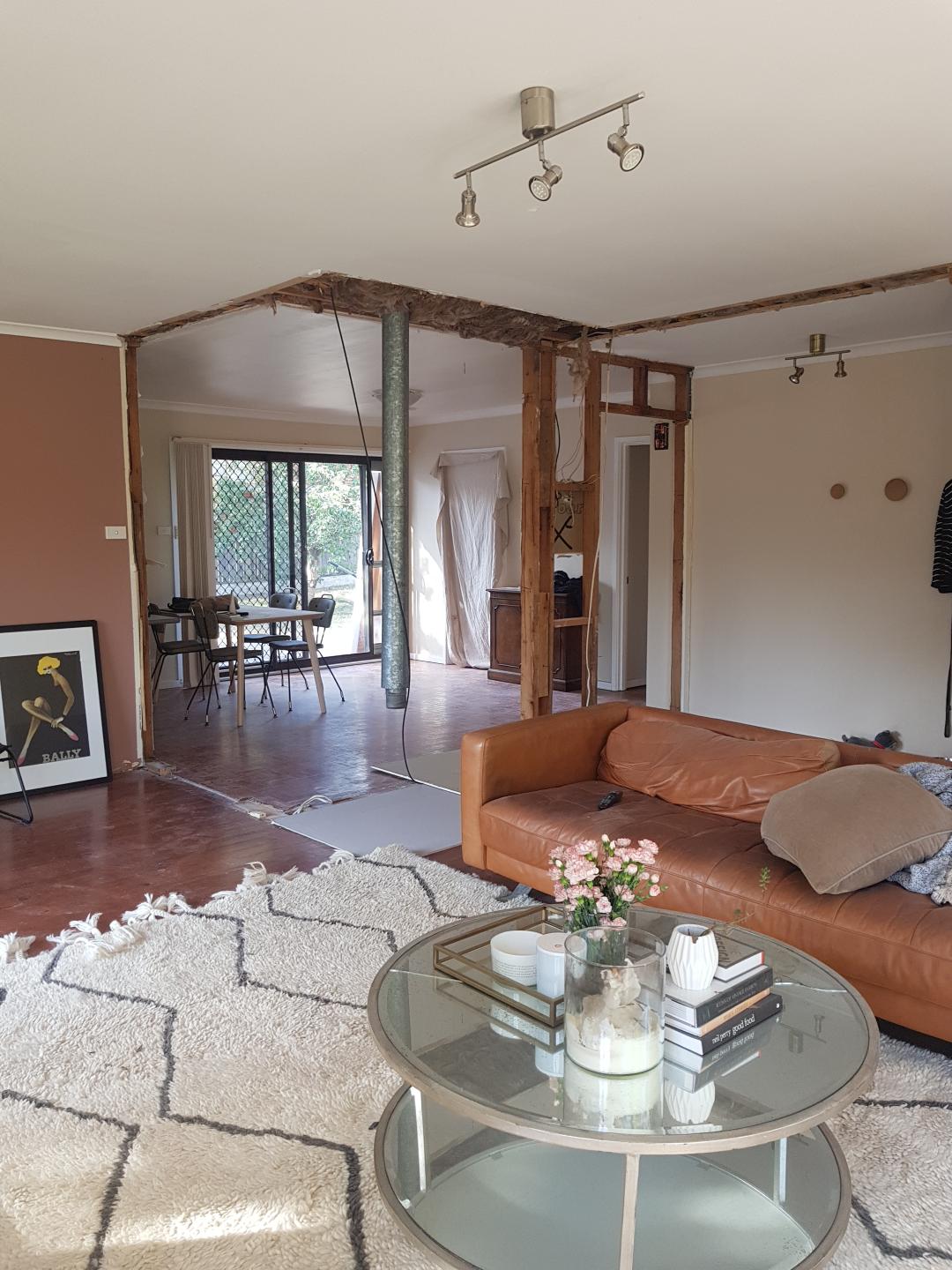 The disused flue and walls are removed to open up the living area to the kitchen and dining space making way for that spectacular view to the outdoors. The new fireplace sits roughly where the sofa is in this photo. 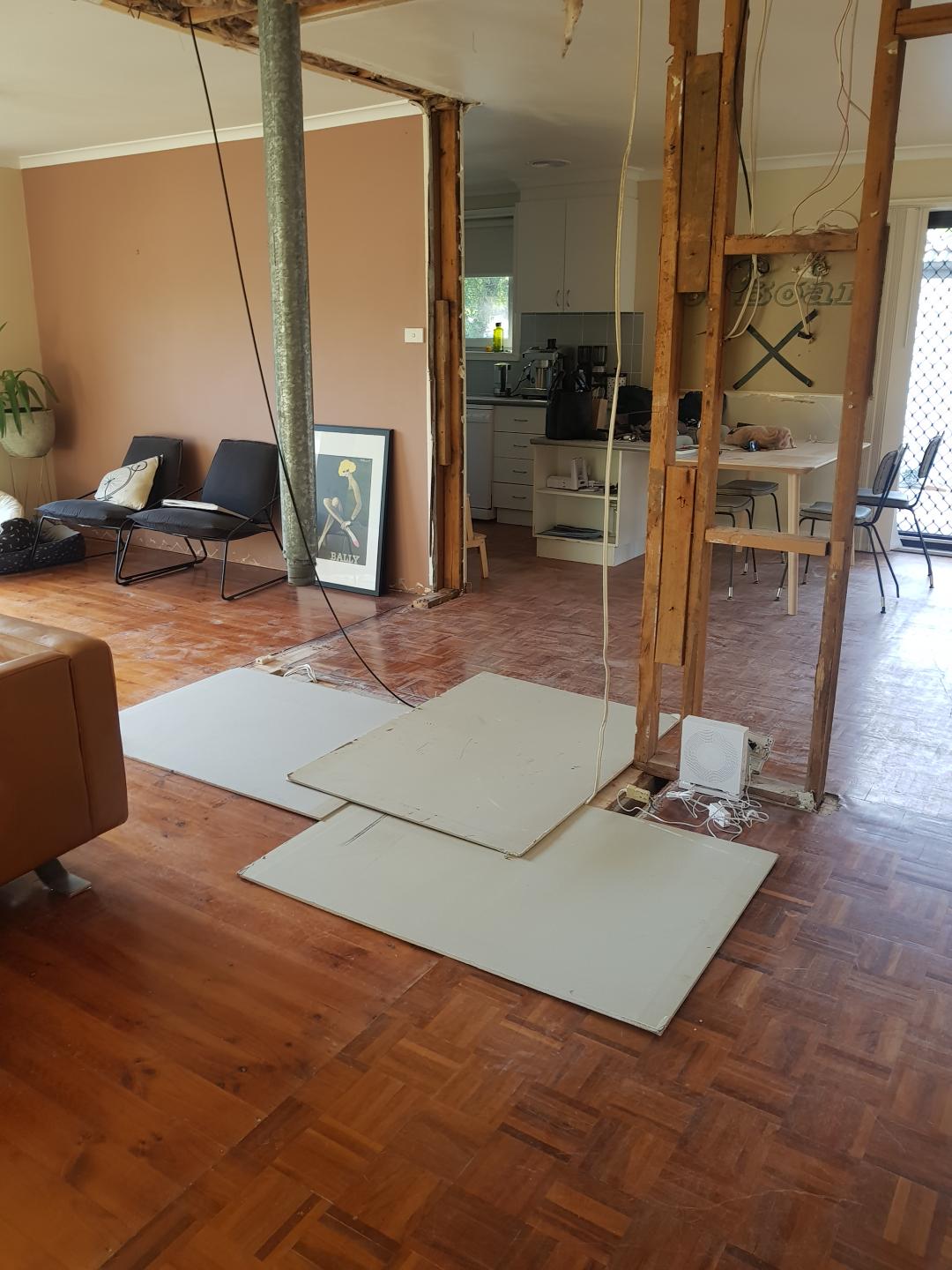 Removing the walls and creating space to install the fireplace. The salmon coloured wall is roughly where the new study sits in the living room. 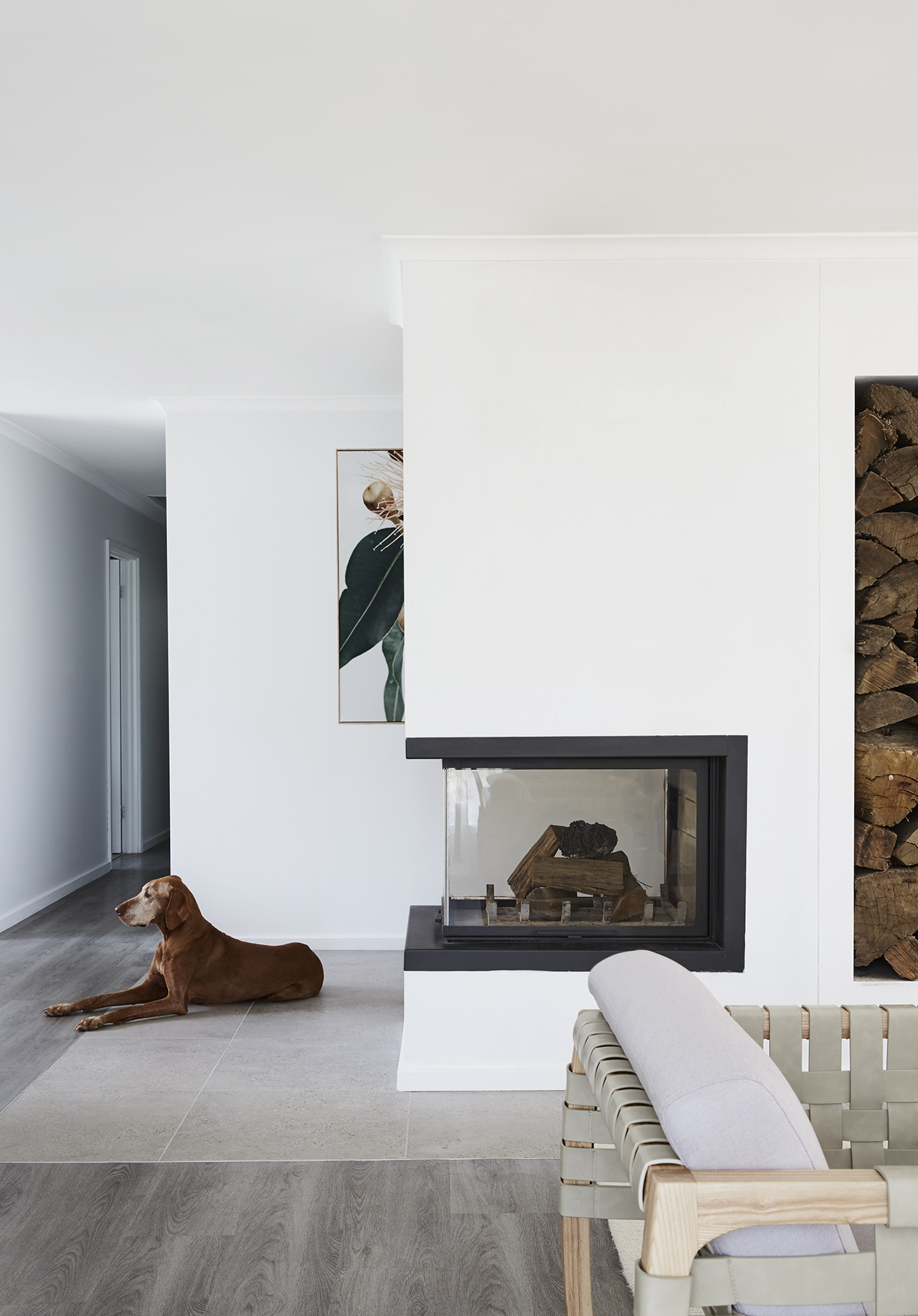 The old flue and wall has been removed to make way for the new three-sided fireplace with the new entry to the family bathroom just visible off the hallway. 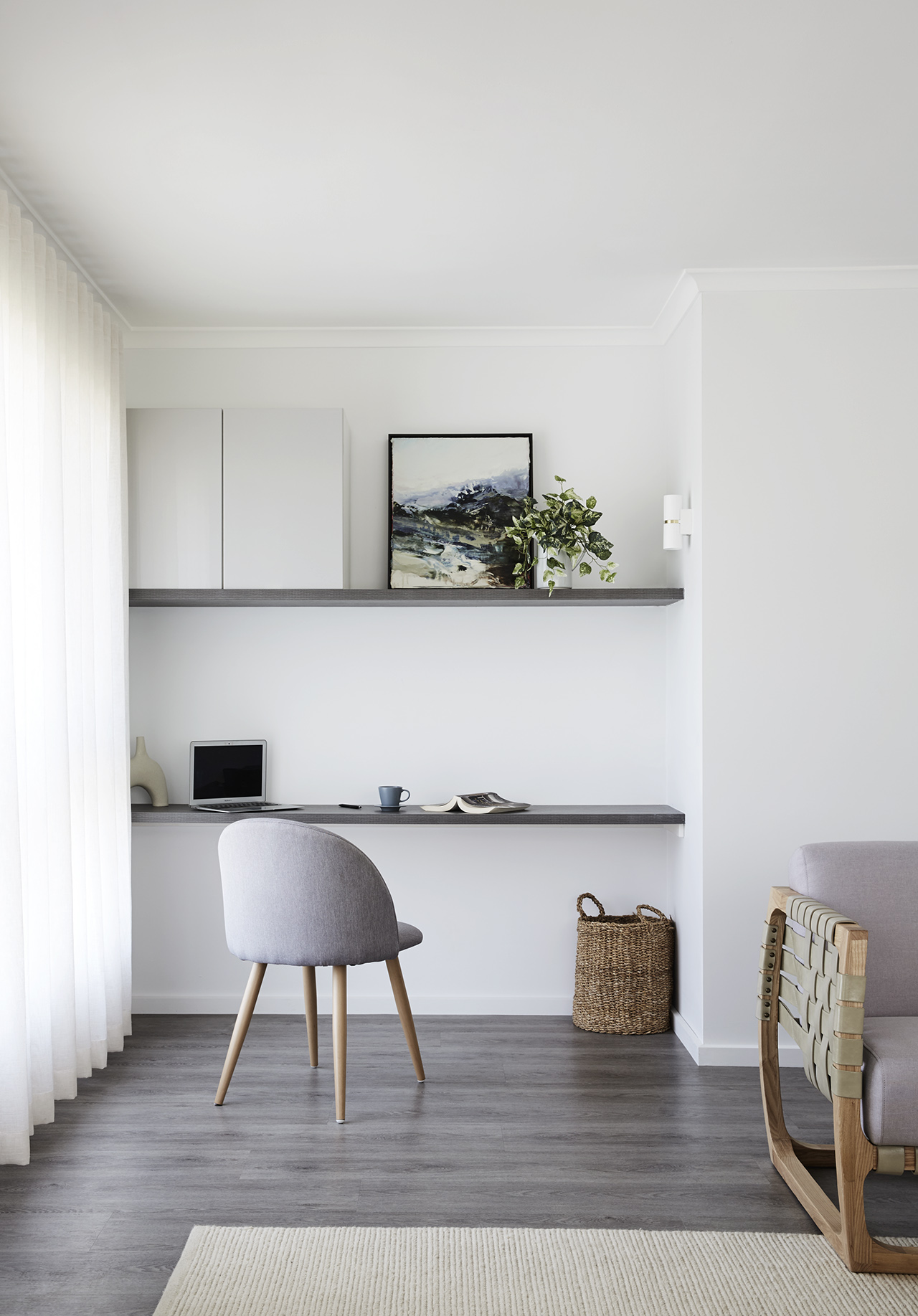 The new study book takes advantage of the natural light and is positioned neatly into the living room.

More Articles
← What's your design style? How to achieve a timeless design →